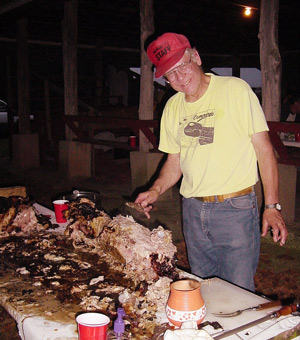 Dave Gerberding was a long-standing member and fixture of the club, joining in 1985. Besides being a Norton guy from “back in the day” he was the master of the Hogslayer, holding court over the cooker and the cooks every Rolling Thunder. Dave died suddenly, returning from work on his bike.

The very first RT I attended was in 1993, I arrived on Saturday morning as breakfast was in full swing, there was Dave supervising operation of our engineering cooking marvel and barking orders at the hash slingers like a drill sergeant. He was in his element when we hosted the 1999 INOA National at Buena Vista, Virginia. As a fund-raiser we sold a hot breakfast every morning severing many rally attendees.

Dave was also a master salesman. He would set up shop at the NCNO stall at each British Bike Day and was always very successful at moving the merchandise. I think I once saw him selling NCNO sweatshirts on a sweltering day. Even after he and Vickie moved to California and later to North Carolina, Dave often made it back to DC area to attend NCNO related events, especially Rolling Thunders. It wasn’t all that many years ago he took a red eye to Dulles, picked up a loaner Commando that Steve Paleos had left stashed in the long term parking and headed alone to the rally in West Virginia. He was at this year’s Classic British and European Motorcycle Day less than a month ago. Of course our thoughts are with his entire family. At the July meeting we’ll discuss a club memorial ride prior to this year’s Rolling Thunder.

He was born on September 30, 1946 in Vallejo, CA to Henry Hermann Gerberding and Freda Louise Kirchmeyer. David was a loving husband and father and will be remembered for his multitudes of stories and jokes, his encyclopedic knowledge of world events, his excellent dancing skill, and most of all, his days in the kitchen nourishing our hearts and souls one plate at a time. He was employed as a Butcher at the Whole Foods Markets in Chapel Hill, Durham and Raleigh, NC, CA and TX since 2001.

He will be lovingly remembered by his wife of over 28 years, Victoria Anne Albright, his children Nesta Louise Gerberding , 27, and Kevin Christopher Gerberding , 25, his son-in-law Phillip Anthony, Jr., and two grandchildren, Phillip Anthony III and Ian David Anthony, 22 months old. He has lived in Durham, NC since 2004.