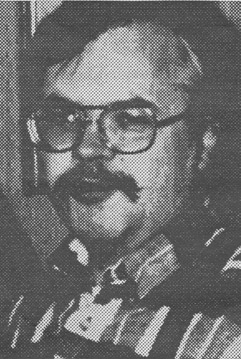 Few words can express our thoughts of the sudden loss of our pal "Wolfie."

It makes us just a little more human when we realize how very precious are the friendships we form during our lifetimes.
An emotional funeral service was held at the Prince of Peace Lutheran Church on Saturday, October 21st, 1995. He was an Organ/tissue Donor.

Some of Wolfgang's ashes were placed with honor at the Arlington National Cemetary, Monday October 30th. The remainder of his ashes will be spread at sea.

Good bye, and Peace be with you.

On the sad issue of our friend Wolfgang Reinhart: Half of Wolfie's ashes were interred in a vault at Arlington National Cemetery, the other half scattered at sea befitting his Naval Service. Special thanks were extended at the meeting to Mike Breed and his lady, Susan, for the exceptional floral arrangement at the interment. It had a Rolling Thunder theme, with our special cloud/lightning bolt motif. That, and the 21-gun salute, were an appropriate sendoff to one classy individual. Wolfie, as TDC Greenbacker reminisced, was as Chris himself an early joiner to the USNOA (Wolfie was member #12). Both attended the very first National Rally in 1978. Wolfgang Reinhart was a man with no enemies, his involvement in our organization stands as a fine example of comradeship and friendliness.

Gentle person that you are

Gone but not forgotten

Looking on from afar

In your red vest

Holding a cup of beer

Is how I remember you

is what you say

I will pull the clutch

Not once, but twice

Of Springfield, VA, on Wednesday, October 18, 1995 at Fairfax Hospital, beloved husband of Helen A. Reinhart; devoted father of Christina M-E Reinhart; son of Alfred and Margot Reinhart; brother of Gary A. Reinhart and Caren Ramsey. Friends may call at Prince of Peace Lutheran Church, 8304 Old Keene Mill Road, Springfield, VA on Friday from 7 to 9 p.m. where services will be held on Saturday, October 21 at 1:30 p.m. Interment private. In lieu of flowers the family suggests contributions to the American Heart Association, 7203 Poplar St., Annandale, VA 22003. Arrangements by Money and King Funeral Home, Vienna, VA.